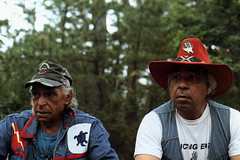 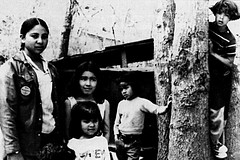 Questions of identity are among the most difficult issues facing Native peoples today. Who is Native American, who is not? Who decides? Whose definition of identity prevails? Many Native peoples are well known, their recognition by the U.S. government marked by treaties and by the establishment of reservation lands. But many other Native communities who know their own tribal identity go unrecognized as such by the United States. Questions of the federal recognition of American Indian identity are highly charged political matters that affect access to the protection of treaty relationships and treatied lands, as well as access to Indian health and welfare programs. Because these questions are about identity, the critical matters of emotional, social, and spiritual well-being are also key.

The United States officially recognizes over 500 distinct Native communities, but there remain numerous Native communities who know clearly who they are but who remain formally unrecognized by the United States, even when they receive recognition by states or localities. In the 1930s, when Congress created the structure of tribal governments under the Indian Reorganization Act, many Native communities, including treaty signatories, chose not to enroll themselves in the recognition process, often because their experience with the United States was characterized more by unwanted intervention than by clear benefits. But the capacity and charge of officially recognized tribal governments grew with the Great Society programs in the 1960s and in particular with an official U.S. policy of Indian self-determination. This policy came to life through such laws as the 1975 Indian Self Determination and Education Act, which enabled tribal governments to act as contractors for government educational and social service programs. Decades later, the Indian Gaming Regulatory Act formally acknowledged the authority of recognized tribal governments to engage in casino gaming in cooperation with the states.

Currently, Native communities that remain unrecognized are not authorized to benefit from such programs and policies and, as a consequence, numerous Native communities have stepped forward to apply for federal recognition—a lengthy, laborious, and highly-charged political process overseen by the Federal Bureau of Indian Affairs, Office of Indian Recognition. Some communities, like Michigan’s Little Traverse Band of Odawa, have pursued recognition directly through congressional legislation. Federal recognition gives Native communities a kind of legal standing to pursue other interests with more legal and political resources at their disposal. Communities lacking this standing, for example, are not formally included in the considerations of the Native American Graves Protection and Repatriation Act.

The case of a Wampanoag community in Mashpee, Massachusetts illustrates the dilemma facing many Native communities seeking recognition. The town of Mashpee has been home to several hundred people of the Wampanoag nation since the early 1600s, when disease and dislocation brought them there from all around Cape Cod. Settlers on the Cape called Mashpee “Indian Town.” During the past century, the Wampanoags of Mashpee saw no need to obtain federal recognition as an “American Indian tribe” in order to live as a Native community. In fact, most probably thought that keeping a low public profile was a surer way to protect their distinctive way of life. But, as Cape Cod became fashionable in the 1960s and developers began buying up the land surrounding the community, the entire way of life of the Mashpee community became threatened.

Encouraged by the success of other Eastern tribes in gaining recognition and winning land claims, the Mashpee Wampanoag Tribal Council, Inc., representing most of the Native residents, brought suit in 1976 against developers and private landowners for 16,000 acres of land in and around Mashpee. To stress its interest in saving Native land rather than displacing private homeowners, the Council later reduced its claim to 11,000 acres of primarily undeveloped land. The Federal District court case of Mashpee Tribe v. New Seabury et al (1st Dist., 1979) hinged on questions of identity. Lacking a treaty and federal recognition, could the Mashpee community, organized currently as plaintiffs, be considered a continuous political unit as a tribe? Did that community lose title to its lands in violation of Congressional requirements that the United States approve of all such private transactions?

The Mashpee people themselves knew of their strong cultural roots and heritage, but the historical dynamics of their community worked against them in court as they tried to persuade an entirely non-Native jury that they had constituted a continuous “tribe” since the 1600s. The Mashpee Wampanoag had long been primarily Protestant Christian in their public religion, had lost their Massachusetts language around 1800, had assumed New England’s township form of government, and had intermarried significantly over time, blending almost completely with other residents of the Cape, both of European and African-American descent. Furthermore, most of Mashpee’s history, as well as its religious, cultural, and social distinctiveness, lay solidly in its oral tradition, difficult to examine and evaluate in court.

On the Mashpee’s own terms, none of these factors made them any less Native. There was room in their embracing spirituality for Christian practices and beliefs and there was room for adopted members, regardless of their skin color. As for the continuity of structures of governance, Mashpee was originally formed as a community of refugees. From the earliest days, its survival hinged on healthy interaction with the surrounding New England society and economy.

The Mashpee Wampanoag knew themselves to be a continuous Native community. So, too, did their neighbors, since Mashpee had always been Cape Cod’s “Indian Town.” With the high stakes of real estate at issue, however, the jury in this case decided that, while the Mashpee community had a Native culture, it did not remain a continuous “tribe.” Mashpee representatives took their struggle for federal recognition out of the courts and into the legislative process. In 2007, the sovereignty of the Mashpee Wampanoag was recognized by the federal government, thirty-one years after the tribe began pursuing such recognition.