This profile was last updated in 2002 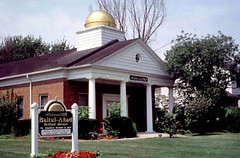 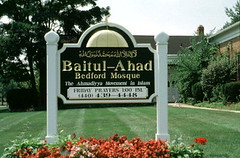 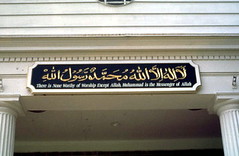 Prayer and Sermons are held on Friday at 1:00 P.M. During the winter months, meetings and monthly prayers take place on Sunday. Other events include: weekly Friday prayers, celebrations at the center of all religious holidays, funerals and wedding ceremonies, monthly general body meetings, and the hosting of annual religious seminars. Activities include special events, group meetings and classes, as well as programs for children with instruction in reading the Holy Book (Qur’an) and in learning prayers and traditions. The center publishes a newsletter both nationally and internationally. The Eid al Adah holiday brings in about 65-75 participants to celebrate, as does the Eid al Fitr celebration. Nightly prayers are held at the center during the month of Ramadan. Each year Regional Meetings/Seminars are attended including the National Jalsa Convention Washington, D.C.,at the end of June.

The Cleveland area chapter began in the late 1930s with Friday noon prayer meetings at a work site. As the group began to grow, one or two families began to rent out spaces in local buildings or hotels. The first local family was Mr. Syed Abdul Rahman’s whose relatives are currently involved, including 13 descendants still active in the area. As the chapter continued to grow, 12 families contributed funds to purchase a Presbyterian church which was renovated and converted into a mosque around 1986. During the renovations, they were faced with major challenges including several attempts to secure zoning changes which were strongly resisted by local authorities, making mosque construction almost impossible.

The center is comprised of mostly adult men and women, a large majority with Indian and Pakistani roots. They are separated during prayer by a curtain.

Description of the Center

The present structure is a 5000 square foot, 2 story building with a basement. It consists of meeting rooms, a large prayer room, stage and pews, closed circuit TV and sound system, as well as a satellite system for national and international communications. There is also an apartment for visiting missionaries. One of the most prominent features of the building is the large golden dome on top that was custom built in the Islamic tradition.