This profile was last updated in 2004 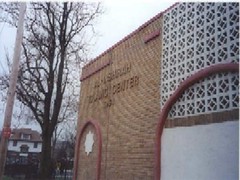 Located in the heart of Kansas City is the Al Inshirah Islamic temple. The small box-shaped building has been the home to Islamic worshipers for many years. It is part of the world-wide Sunni Muslim community and the Muslim American Society (MAS). “Al Inshirah” is an Arabic word and comes directly from the Qur’an. A translation follows: O prophet! Have we not expanded your breast for you, and relieved you from the burden, which weighed down your back, and exalted your fame? Surely, with every difficulty there is relief. Surely, with every difficulty there is relief. Therefore, when you are free from your daily task, devote your time to the labor of worship and turn all your attention toward your Lord. The Al Inshirah temple was originally founded as a member of the Nation of Islam (NOI) religious sect. Historically, NOI has held itself separate from traditional Islam. After many NOI members around the U.S. decided to affiliate with MAS in 1975 (the year when NOI leader Elijah Muhammad died), the congregation decided to follow suit. Since this change of affiliation occurred a relatively short time ago, members of the congregation still have some Nation of Islam ideals. The temple building has separate entrances for men and women, a main sanctuary for prayer, and small meeting rooms. Its sanctuary is oriented towards Mecca, Saudi Arabia, the spiritual home of Islam. Along with having Friday services, Saturday and Sunday classes, and five daily prayer times from sunrise to sunset, the Al-Inshirah temple is a member of the Congregational Partners program of Kansas City Harmony, which assists congregations of different denominations, faiths, and ethnicities to build relationships of trust and to unite to serve the Kansas City metropolitan community.