A Community for Contemplative Practice

This profile was last updated in 2003 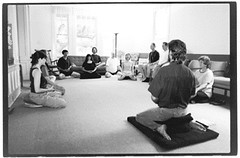 A Community for Contemplative Practice (2003)

A Community for Contemplative Practice meets every Thursday from 7:30-9:00 p.m. at Rolling Hills Yoga Studio. Meetings include a half hour of meditation followed by a talk and discussion. Courses on the history and teachings of Zen and other contemplative currents are offered periodically on Sunday afternoons.

After receiving a Masters degree in theology from the Graduate Theological Union, and another from Harvard Divinity School, David Collins was informed by an advisor that he might be better suited in psychology–since his interest was in the actual experiences that mean most to human beings in their lives. David went on to receive a Ph.D. in clinical psychology. His doctoral dissertation focused on the way identical experiential practices underlie the quite different religious vocabularies of the Soto Zen master Dogen’s instructions for Zen meditation and the Christian author of The Cloud of Unknowing’s instructions for contemplative prayer. (Collins was then informed by a psychology advisor that he might be better suited in religious studies.) Collins sees much of contemporary psychology as a form of contemplative spirituality, and vice versa. Leaving the academic distinctions behind, he moved to Austin, Texas, where he formed the group, A Community for Contemplative Practice (CCP). A Community for Contemplative Practice incorporated his years’ long training in Zen meditation, comparative religion, and psychology.

When deciding how to list the organization in the Yellow Pages, he opted for “Churches-Buddhist”, for lack of a better category. Said Collins, “The view that psychology is a religion is of course a postmodern perspective. Buddhists, on the other hand, have been ‘postmodern’ for 25 centuries.” When CCP tried to open a checking account, the bank required articles of incorporation. Once incorporated as a religious non-profit, however, the Texas State Comptroller then refused to acknowledge CCP as a religious group. Combined with changes in the state’s counseling license laws, defining “facilitating spiritual development” as a form of counseling, the Comptroller’s position effectively made it illegal for Collins and his group to “just sit.” David had no choice but to prove to the Comptroller that his practice of contemplative spirituality was religion. He took the Comptroller’s Office to court. The opposing lawyers argued that an organization must profess a belief in God in order to be considered a religion in Texas. This unwritten policy, however, would technically have made all Buddhists, Taoists, and many Hindus, unrecognized by the state (and not just CCP and the Texas Chapter of the Ethical Culture Fellowship, which had also been targeted by the Comptroller’s Office). Collins represented himself. With the help of expert witnesses, including a professor of theology, a Catholic nun, and a Presbyterian minister, he got the case dismissed, and the group was allowed to continue its practice in peace. The unusual case was covered by local newspapers such as the Austin American Stateman and the Austin Chronicle.

The group maintains a low profile and is currently rather small. Racially mixed, many members also practice with other spiritual groups, though most have a particular interest in Buddhism.

A Community for Contemplative Practice currently meets in a Yoga Studio. Participants sit in a circle with cushions. Lights are usually kept dim during the meditation period.

A Community for Contemplative Practice is totally pragmatic in its approach to meditation, seeing different contemplative traditions as a common essential experience described by many people. Meditators are encouraged to use whatever methods work best for them. Collins offers instruction on aspects such as spinal alignment and breathing. Readings often focus on Soto Zen but other topics include the historical Jesus, Rumi, art, and psychology. During discussion, members are encouraged to bring up any subject they want.