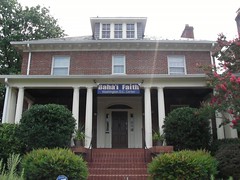 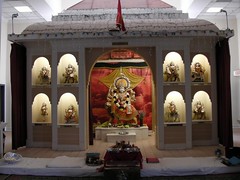 Pierre L’Enfant envisioned the nation’s capital in 1791, creating a plan that included a network of tree-lined streets, traffic circles, and monumental buildings, as well as a national place of worship, the National Cathedral. However, this French city planner and engineer could not have envisaged the religious reality that would emerge in Washington. Today, not far from the Gothic spires of the National Cathedral rises the minaret of the “National Mosque,” the Islamic Center of Washington, D.C. Between the spires and the minaret one can see the domes of St. Nicholas Cathedral of the Orthodox Church in America and St. Sophia Greek Orthodox Cathedral. The mosque and the Orthodox cathedrals are located on “Embassy Row,” the section of Massachusetts Avenue on which diverse and distinctive architectural styles symbolize the international dimensions of the city.

On nearby Michigan Avenue towers the Romanesque-Byzantine Basilica of the National Shrine of the Immaculate Conception, the largest Roman Catholic Church in the United States. It houses over seventy chapel and oratories dedicated to the Virgin Mary under a variety of ethnic and cultural titles that reflect the diversity of this Christian tradition. A number of Jewish synagogues and community centers are present in the District and more in the surrounding areas. Some of the most historically significant of these include the Washington Hebrew Congregation, Adras Israel Synagogue, Sixth & I Historic Congregation, and the Ohev Sholom Talmud Torah Congregation.

Another of the great radial streets of the capital, New Hampshire Avenue, just beyond the District of Columbia in Silver Spring, Maryland, might aptly be called “Religious Row.” Here one passes the large Vatt Buddhikarma Cambodian Buddhist temple and monastery, then the Muslim Community Center, flanked by St. Andrew’s Ukrainian Orthodox Cathedral and a Disciples of Christ church. Close by, the Chinmaya Mission of Washington and the Mangal Mandir Temple serve the area’s Hindu community. Virtually neighbors, the close proximity of these places of worship symbolize the new religious diversity of the nation’s capital, and by extension, of the nation itself.

The Washington, D.C. area includes both the city of Washington and the neighboring suburban communities of Maryland and Virginia. Beyond the Beltway in these suburbs are some of the most distinctive landmarks of the new religious landscape. In neighboring Fairfax County, Virginia, for example, the Sikh Foundation of Virginia’s Gudwara Sahib stands adjacent to the Virginia Korean Baptist Church. The Hindus of Fairfax County have built three temples with the Durga Temple being a notable one. In Lanham, Maryland, Hindus have built the distinctive Sri Siva Vishnu Hindu temple whose nineteen shrines and six architechtural styles demonstrate the community’s own internal diversity. Just a few miles away stands the Murugan Temple of North America, the first of its kind to be built in the United States. In addition to the Cambodian temple in Silver Spring, there are Thai, Japanese, Mahayana, and Tibetan Buddhist centers. As a whole, the metropolitan Washington, D.C. area now has well over thirty Buddhist centers, thirty Islamic centers and institutions, at least twenty-four Hindu temples, and nine Sikh gurdwaras. There is also a Jain Society and a Zoroastrian Association of Metropolitan Washington.

The religious communities of the nation’s capital undoubtedly have a more visible role than they might in other cities because of their proximity to the center of government and to the many religious organizations that bring a religious voice to national issues. Most people are aware of the work of such groups as the National Conference of Catholic Bishops or the National Council of Churches, which make their voices heard in Washington. But there are also many Native American lobbying efforts, such as those of the nearby Piscataway Indian Nation whose leaders have been involved in the American Indian Movement (AIM) and in the formation of the National Museum of the American Indian, located on the National Mall. The Sikh American Legal Defense and Education Fund (SALDEF) maintains an office here, as does the International Campaign for Tibet, and the Ahmadiyya National Headquarters. The Muslim Public Affairs Council works to raise political awareness of the concerns of Muslims in America. In 2011, Hindu American Seva Charities partnered with the White House Office of Faith Based and Neighborhood Partnerships to promote community service (or seva) and collaboration. The interfaith community also participates in governmental advocacy and education through organizations like the Washington Interfaith Network.

One of Washington’s oldest interfaith organizations is the Interfaith Conference of Metropolitan Washington (IFCMW). Founded in 1978, IFCMW is now one of the most active urban interfaith groups in the country. It fosters interfaith relations among communities representing eleven different faith traditions, including Bahá’í, Buddhist, Hindu, Islamic, Jain, Jewish, Sikh, Protestant, Roman Catholic, Latter-day Saint, ans Zoroastrian. Because of its visibility in the nation’s capital, many of the programs of the IFCMW have become models for communities across the United States. Its annual interfaith concert, a gala evening of music, and its 9/11 Unity Walk are two prominent examples. In 2012, after the tragic shooting at a gurdwara in Oak Creek, Wisconsin, members of the IFCMW organized an interfaith prayer vigil at the Sri Shiva Vishnu Temple to show solidarity with the Sikh community. The event was attended by members of local faith communities, as well as representatives from the White House, the FBI, the Department of Homeland Security, and local and state government officials.

From Embassy Row to the halls of Congress, along the Baltimore-Washington Parkway and Pennsylvania Avenue, Washington, D.C.’s network of communities and coalitions embody the challenges and opportunities of America’s diverse religious landscape.