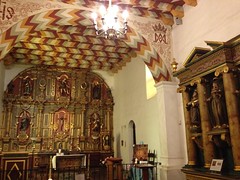 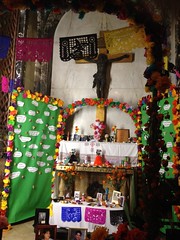 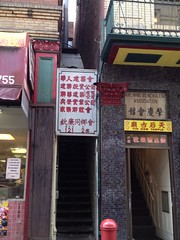 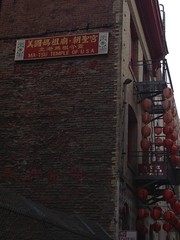 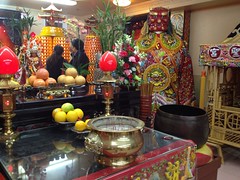 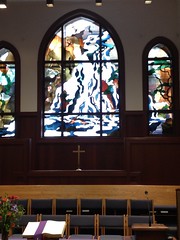 San Francisco began as a Spanish mission, San Francisco de Asis, on land inhabited by Native Ohlone/Costanoan peoples for centuries. The year was 1776, the same year the Declaration of Independence was signed on the other side of the continent; here, Franciscan missionaries established their outpost on the highland area now called the Presidio. In 1846, California declared independence from Mexico, and in 1848, after a long war, Mexico ceded California to the U.S. Then gold was discovered at Sutter’s Mill and the rush to California began: this gold rush of 1849 brought an eager and diverse lot of “forty-niners” to the Bay Area. Since that time, successive waves of immigrants have made the San Francisco Bay Area their home, seeking opportunities and creating a new religious reality.

The city’s first Jewish service was held in a space above a store in 1849; today, it is the site of the iconic Transamerica Pyramid. This Jewish congregation built the city’s first synagogue in 1854. A number of San Francisco’s Jews have figured prominently in the city’s development, including Levi Strauss, who started making “Levis” from the canvas used for tents and covered wagons. Today, there are more than 200,000 Jews living in the Bay Area, representing the whole spectrum of modern Judaism, including Jewish Renewal, LGBTQ, independent, and unaffiliated congregations.

Chinese miners were attracted by the gold rush, the first group arriving in 1848. They brought Taoist, Buddhist, and Confucian traditions to America for the first time. In 1852, America’s first Chinese temple was opened in what was to become San Francisco’s Chinatown. Over more than 150 years, Chinatown has grown and been surrounded by a city of skyscrapers, but it retains its concentration of Chinese temples and Chinese churches. Increasingly, second- and third-generation Chinese have moved out of Chinatown to North Beach, Russian Hill, or the Richmond district north of Golden Gate Park. In Richmond today, there are many Chinese Buddhist temples.

In the 1860s, Japanese workers began to arrive, many of them followers of the Jodo Shinshu tradition. In 1914, they built their first temple, the Buddhist Church of San Francisco, which has long served as a center of Japanese Buddhism in the Bay Area. The temple was closed during World War II when the Japanese of San Francisco, including many second and third generation Americans, were sent to “relocation centers.” After the war, the temple reopened and functioned as a hostel to help Japanese Americans as they re-established their lives in the area. Today, the Buddhist Church of San Francisco’s Obon Festival annually attracts Buddhists and non-Buddhists alike; the first festival at the temple was held as early as 1931 and is thought to be the oldest Obon Festival observances in the continental United States.

The Buddhist life of the Bay Area includes the traditions of these Chinese and Japanese pioneers, as well as more recent Thai, Cambodian, Vietnamese, Korean, Burmese, and Tibetan communities. The distinctively American Zen movement that formed under the leadership of Shunryu Suzuki Roshi in the 1970s runs the San Francisco Zen Center (SFZC), Green Gulch Farm, and the Tassajara Zen Mountain Center. There are dozens of other American Buddhist meditation centers, retreat centers, and community projects. One such center, the Hartford Street Zen Center, created the nation’s first Buddhist AIDS Hospice in the United States in the late 1980s; today, the Maitri Hospice continues its work, and is joined by the SFZC’s Zen Hospice Project, which provides care for the dying through an extensive volunteer program and guest house, as well as grief support and programs for those living with chronic illness.

The Bay Area is also characterized by a diverse Christian population. In 1872, with a growing community of Russian Orthodox Christians, the diocesan headquarters for the Russian Church in the West moved to San Francisco from Sitka, Alaska. San Francisco remained the center of Russian Orthodoxy in the United States until 1905. The Roman Catholics, who founded the San Francisco mission more than two hundred years ago, have a vibrant history here. Nowhere is this more evident than in the city’s Mission District, where Spanish-speaking immigrants from Mexico and Central America have transformed the urban landscape through the work of large, energetic parishes like St. Peter’s. Painters, using the walls of churches for a canvas, have rendered powerful outdoor murals depicting the human struggle for freedom and justice. The city’s African American churches are also numerous and include the unique Saint John Coltrane African Orthodox Church, where saxophone players process down the aisles playing jazz. The great churches of the city range from the United Methodist Glide Memorial Church with its powerful urban outreach programs, to the elegant Episcopalian Grace Cathedral on top of Nob Hill, to the modern St. Mary’s Cathedral of the Catholic archdiocese.

Before the mid-1950s, there was no meeting place for San Francisco’s Muslims, who were forced to travel to Sacramento for communal prayers. In 1955, the Muslim community was offered a small room at the College of the Pacific in which to meet and hold daily prayers. Nine years later the Islamic Center of San Francisco was established in a former Black Baptist Church on Crescent Street. Today, the mosque continues to serve a large, ethnically diverse congregation of American Muslims, many hailing originally from India, Pakistan, the Middle East, Southeast Asia, and Africa. Masjid Darussalam, the largest mosque downtown, uses its central location to promote interfaith cooperation and to serve the local community. Today, there are more than forty mosques throughout the Bay Area; in Berkeley, Zaytuna College, the first Muslim college in America, was established in 2009.

The Pagan community is also thriving in the Bay Area, where the international headquarters of the Covenant of the Goddess, the Women’s Spirituality Forum, and the Reclaiming Collective are all located. The Reclaiming Collective, founded in 1981, sponsors the annual public Spiral Dance ritual, which has grown to become a well-known part of the Bay Area’s celebration of Samhain (Halloween). It remains one of the largest participatory Wiccan rituals in the United States, drawing over 1,200 participants each year.

San Francisco is home to the oldest Hindu temple in the West, the Vedanta Society of San Francisco founded by Swami Vivekananda himself. The Vedanta Society continues to draw Euro- and Indian-American devotees. After the passage of the 1965 Immigration Act, large numbers of South Asians began settling in the Bay Area and the following two decades witnessed the rapid growth of South Asian religious communities. In Silicon Valley during the 1980s, Hindus built the area’s first large Hindu Temple, located in the city of Livermore. It is now one of more than sixty Hindu temples and organizations, according to the Association for Religion Data Archives. The Sikhs of the Bay Area have built spectacular gurdwaras in Fremont, El Sobrante, and San Jose; in Hayward, the Sikh community gathers in a converted church building, and in the heart of the city’s Haight-Ashbury district, the Guru Ram Das Ashram holds a monthly gurdwara program at the Kundalini Yoga Center. Further south, the Bay Area Zarathusthi (Zoroastrian) community has a dar-e-mehr nestled in the rolling hills outside San Jose.

In the year 2000, the Jain community established a two-story temple in Milpitas, after decades of meeting in rented halls, private homes, and sharing space at the Hindu Temple in Fremont. Amidst the diffusion of the diverse religious communities from South Asia, newer efforts seek to bring these communities together. Not far from the Jain Temple in Milpitas is the India Community Center (ICC), with the slogan: “Unite. Serve. Celebrate.” The ICC seeks to strengthen “a broad and inclusive Indian identity rather than the narrower ones that most other religious or regional centers do.” This center, modeled on the JCC, represents an impulse to connect across lines of difference and to serve the wider community: it also signifies an immigrant community coming of age in America.