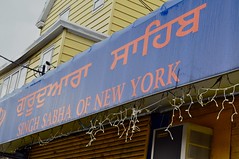 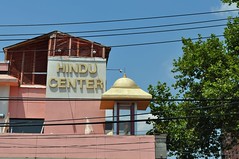 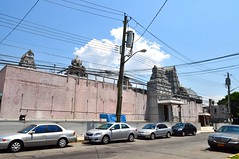 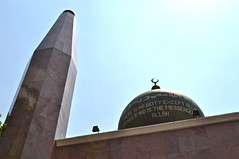 New York City is perhaps the only city in the world where one can find a kosher Indian vegetarian restaurant run by Hindus and a halal Chinese restaurant run by Buddhists. The religious and ethnic diversity of the city’s five boroughs is a far cry from the former 17th-century Dutch settlement of New Amsterdam where the only permitted form of public worship was Dutch Reformed Christianity. Under the Dutch, brutal suppression of local native peoples was accompanied by religious persecution of many immigrants, including the flogging of Quakers, imprisonment of Lutherans, and restriction of Catholic and Jewish observances to private homes. Today, one finds New Yorkers observing and practicing virtually every world religion. The city is home to many American religious landmarks, including one of the first U.S. temples built according to ancient Hindu guidelines, the upper East Side’s ultra-modern Islamic Cultural Center of New York, the first Jain temple in North America, and the nation’s largest Christian cathedral, St. John the Divine Protestant Episcopal Church.

The cornerstone of St. John the Divine Protestant Episcopal Church was laid in December of 1892, just as Ellis Island opened as an immigration processing center. The Cathedral was originally chartered as a house of prayer for all people; its goal was to serve the local community. In the decades since St. John the Divine was founded, immigration has dramatically increased the religious diversity of New York and the Cathedral has become a center of both ecumenical and interreligious activity. In addition to hosting interfaith services to commemorate key world events or to memorialize individuals, Cathedral staff has also created an interfaith curriculum for touring the Cathedral campus in addition to other significant religious sites in the City such as the Islamic Cultural Center of New York, the New York Buddhist Church, and the Eldridge Street Synagogue. The Cathedral has hosted ritual performances of the Whirling Dervishes, invited Buddhist monks to demonstrate chanting and to create a mandala, and annually sponsors a Thanksgiving celebration which includes Native American sacred dance. The Cathedral has also been instrumental in the founding of the Temple of Understanding, an international organization dedicated to interfaith understanding. The Dalai Lama, a Temple of Understanding member, has spoken at the Cathedral on many occasions, the first in 1979.

Flushing, in the borough of Queens, offers another vivid example of New York City’s vibrant religious history, and its varied and diverse present. One public school in Flushing currently enrolls students from over fifty different countries of origin, who speak nearly as many different languages. Flushing was also the first American community to draft a written protest against religious intolerance, the Flushing Remonstrance of 1657. The Quaker Meeting House which stands on Bowne Street is a national shrine to religious freedom, a freedom to which the numerous houses of worship in the immediate vicinity richly attest. Today in a few minutes of walking, one can visit two gurdwaras, several synagogues, two Hindu temples, three Buddhist temples, and a variety of Chinese and Korean Christian churches. Flushing is living out in deeds the words of the Remonstrance: “We desire therefore in this case not to judge least we be judged, neither to condemn least we be condemned, but rather let every man stand and fall to his own master. We are bound by the Law to do good unto all men, especially to those of the household of faith.”

The tragic events of September 11th, 2001 had a profound impact on America; no where has that impact been felt more deeply than in New York City. In the hours and days following the attacks, thousands gathered spontaneously at churches, synagogues, and mosques across the city, including St. John the Divine, where they could reflect and seek comfort among their fellow New Yorkers. Many organized interfaith memorial events followed. One such event was an interfaith prayer service hosted by Mayor Rudy Giuliani which drew thousands to Yankee Stadium and featured religious leaders as well as celebrities like Oprah Winfrey.

While interfaith cooperation in the Big Apple has been evident post-9/11, so, too, has backlash against Muslims, Sikhs, and others who “look like terrorists.” This sentiment hit a fever pitch in 2010 when protests erupted over the proposed building of Park51, an Islamic community center in Lower Manhattan. The project was dubbed by opponents as the “Ground Zero Mosque” and criticized for its relative proximity to the site of attacks on the World Trade Center, now a memorial. Despite the controversy, Park51 opened in 2011 and today hosts photography exhibits, Arabic classes, and introductory discussions on Islam and Muslims in America.

New York City’s rich history as an entry point for immigrants and a city of vast opportunities, has made it known as one of the most diverse cities in the world and a prime location for interfaith work. It is home to many interfaith organizations like the Interfaith Center of NY, World Faith, The Temple of Understanding, and the Tanenbaum Center for Interreligious Understanding. But it is also a place where different faith-related organizations as well as secular organizations have forged alliances. In light of the Oak Creek gurdwara shooting in August 2012, hundreds of people gathered in Union Square for a candlelight vigil where many offered messages of sorrow, hope, and solidarity. These efforts, along with interfaith programming at Auburn Seminary and initiatives like the Groundswell Movement are reminders of New York’s longstanding and vibrant engagement with its multireligious reality.