Recent Caribbean immigration to Greater Boston has brought with it a number of African-inspired religions, including Santeria from Cuba and Vodou from Haiti. These traditions acknowledge a supreme God, but emphasize the predominance of many spiritual beings in daily life, some of which have been homologized to Catholic saints and are honored in that context. It is difficult to determine the size of the Afro-Caribbean religious population in Boston as ceremonies are rarely publicized and often take place in private homes. Practitioners frequent botanicas–stores that supply the religious objects for Santeria and Vodou practice such as candles, oils, beads, statues, and herbs–a number of which are present in Jamaica Plain, Mattapan, Dorchester, and Somerville.

Afro-Caribbean religions are a loosely related collection of African-derived spiritual traditions, including Cuban Santeria, Haitian Vodou, Brazilian Candomblé, and Obeah in Suriname and many Caribbean islands. Each of these traditions represents a unique set of beliefs, practices, rituals, language, and cultural relevance to its specific community. Though they hold much in common, these traditions are wholly unique.

Brought to the Americas by Atlantic-bound slaves, Afro-Caribbean traditions blend the indigenous beliefs of West African slaves with the Catholicism or Protestantism of their masters. Whether by forced conversion, cultural assimilation over time, or simply out of necessity to avoid the suspicion of their masters, West African slaves hybridized traditional rituals and spirits with Christian ideologies and the veneration of Catholic saints. These are powerful traditions of physical and spiritual healing with efficacy and relevance in daily life; little divides the sacred and the secular.

In Boston, these traditions are primarily represented in large Cuban and Haitian communities that maintain vital practices of Santeria and Vodou, though there are practitioners of Candomblé, Obeah, and other Afro-Caribbean traditions as well.

The presence of Afro-Caribbean religious traditions is directly linked to the increase in Latin American and Caribbean immigrants, currently the largest foreign-born population in Boston. Though there has been a significant Latin American presence in Boston for several decades, their population was boosted by the Cuban Mariel boatlift in the 1980s that allowed over one hundred thousand Cuban refugees to enter the United States. Though most of these immigrants settled in Florida, many migrated north to Greater Boston.

According to the Mayor’s Office of New Bostonians, Latinos accounted for 68.2% of population growth in Boston between 2000 and 2013. As of 2014, Haitians represented an astonishing 8% of the total immigrant population in Boston. The city has also witnessed significant immigration from Brazil, the Dominican Republic, Cuba, and Puerto Rico. Settling in Jamaica Plain, Mattapan, Dorchester, Hyde Park, Roxbury, and Somerville, this influx of Latin American and Caribbean immigrants has dramatically changed the face of religious diversity in Greater Boston with the growth of rich Afro-Caribbean spiritual traditions.

Despite this large Cuban and Haitian population, the number of Afro-Caribbean religious practitioners in Greater Boston is nearly impossible to quantify. Unlike most major religious traditions, there are no churches or temples to survey, and no membership lists to count. To further complicate matters, many Afro-Caribbean practitioners also self-identify as Christian. They are as comfortable attending Mass as they are participating in traditional Afro-Caribbean ceremonies where Cuban santeros and Haitian oungans and mambos – the spiritual leaders of Santeria and Vodou – conduct secretive rituals in private homes and storefronts. These ceremonies are rarely witnessed by outsiders and are advertised almost exclusively by word-of-mouth. Many aspects of Afro-Caribbean practice, including animal sacrifices to mark auspicious occasions, spirit possession or “mounting,” and the veneration of seemingly unfamiliar African deities, has resulted in much apprehension and misunderstanding. Coupled with a persistently negative depiction in the media and frequent accusations of “witchcraft,” it’s no surprise that these communities conduct their religious ceremonies in private.

However, the estimated number of Afro-Caribbean religious practitioners in Greater Boston exceeds several thousand, perhaps even as many as ten thousand – a significant, though relatively small number compared to more than one hundred thousand Santeria followers in Miami and three hundred thousand devotees in New York City. Though these traditions may lack traditional religious centers, the growing presence of botanicas on the streets of Greater Boston – neighborhood stores that supply necessary ritual objects, herbs, oils, and candles for ceremonies – attests to the vitality of these traditions. Though perhaps unseen, the quiet presence of Afro-Caribbean religions in Boston cannot be denied.

The Healing of Body and Soul

Despite the secretive nature of most rituals, local Boston santero Steve Quintana held a public ceremony at a beach in Dorchester in the fall of 2004, lending a moment of transparency to a typically private event. As reported in the Boston Globe, offerings of honey, molasses, and flowers honored the birthdays of the Santeria orisas Yemaya and Ochun, saints of rivers and oceans. Aside from these devotional gatherings, local spiritual leaders regularly receive devotees in private homes and botanicas to diagnose and heal their physical and spiritual maladies with rituals, herbs, and offerings to specific orisas.

Afro-Caribbean spiritual leaders like Steve Quintana are important community healers and regularly assume the multifaceted role of priest, psychologist, and doctor. In times of illness, practitioners of these religions will often see their santero or mambo before consulting a medical doctor. Though lack of health insurance, language barriers, and general cultural marginalization certainly play a role in accessing more traditional medical care, the effectiveness of the herbs prescribed and rituals performed by Afro-Caribbean spiritual leaders cannot be understated. Many devotees simply prefer and trust the power of their local spiritual leader for their physical and spiritual well-being.

The Future of Afro-Caribbean Religious Communities in Greater Boston

If current immigration trends are any indication, Afro-Caribbean traditions will continue to grow and quietly flourish in Greater Boston.

Though these traditions often go unnoticed by outsiders, many civic institutions have taken note of the role they play in new immigrant communities. Dr. Linda Barnes and Dr. Lance Laird directed the Boston Healing Landscape Project, an innovative research initiative at Boston University School of Medicine, which ran from 2001-2008. The project considered how cultural and religious beliefs affect traditional medical care. They partnered closely with leaders in the local Santeria and Voudou communities to learn more about their unique medical needs. By mapping the botanicas of Jamaica Plain, researching the herbs and oils prescribed by local healers, and attending Afro-Caribbean religious ceremonies, the Boston Healing Landscape Project builds new bridges between traditional Western medicine and alternative forms of healing.

The methodologies and findings of the project have been integrated into the curriculum of the Master’s Program in Medical Anthropology & Cross-Cultural Practice through the school’s Division of Graduate Medical Sciences.

Though perhaps unnoticed in a cursory glance of our religious landscape, Afro-Caribbean religious communities are vital agents of spiritual guidance, physical and emotional healing, and cultural identity and support for new and established Latin American and Caribbean immigrant communities throughout Greater Boston. 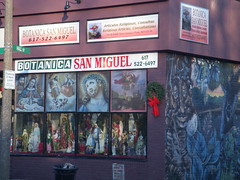 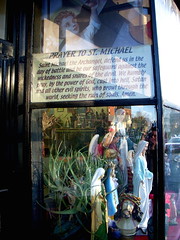 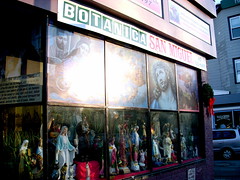 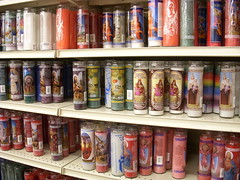 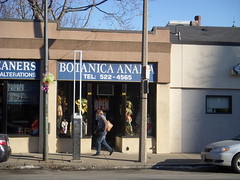 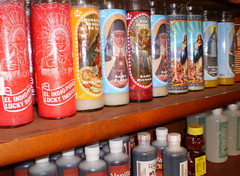 Resources for Afro-Caribbean in Boston