On Thursday, October 21, 2010, the Pluralism Project screened the documentary film “Welcome to Shelbyville” for a diverse audience of Harvard students, staff, and faculty, local civic and religious leaders, representatives from immigrant advocacy groups, and members of the Greater Boston community. Directed and produced by Kim Snyder and executive produced by BeCause Foundation in association with Active Voice, “Welcome to Shelbyville takes an intimate look at a southern town as its residents – whites and African Americans, Latinos and Somalis – grapple with their beliefs, their histories and their evolving ways of life.”

The film was followed by a panel discussion moderated by Pluralism Project Director Diana Eck on issues of immigration and religious pluralism, and how the lessons of Shelbyville can be applied to our own context in Greater Boston. Panelists included Cooperative Metropolitan Ministries Executive Director Alexander Levering Kern, Agencia ALPHA Director of Programs Damaris López, and Nancy Khalil, a doctoral student in Social Anthropology at Harvard University, and a member of the Muslim American Society Boston and the Islamic Society of Boston Cultural Center Board of Directors. Event co-sponsors included the Center for the Study of World Religions, the Outreach Center at the Center for Middle Eastern Studies, the Harvard Organization for Latin America (HOLA), United World College, the Harvard Islamic Society, Cooperative Metropolitan Ministries (CMM), Massachusetts Immigrant and Refugee Advocacy Coalition (MIRA), Agencia ALPHA, Active Voice, and the BeCause Foundation. 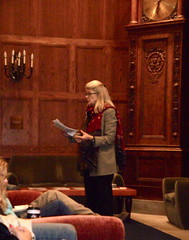 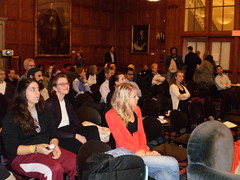 “Welcome to Shelbyville” Film Screening and Panel Discussion
We apologize if you have been experiencing outages with our website. We are working on fixing this in the short term and we will be launching an improved website early in 2020 that will not have the same issues. Thank you for your patience!
X