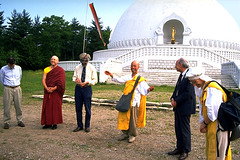 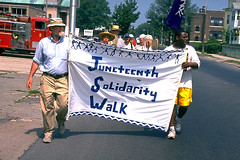 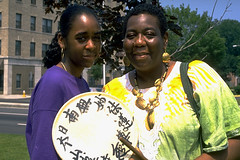 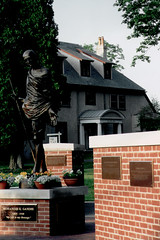 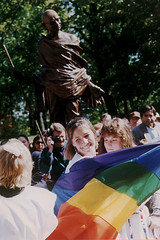 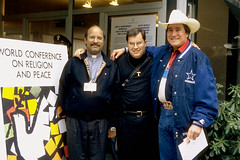 The principle that we should not do separately what we can do together has launched many ecumenical and interreligious initiatives in the United States and, indeed, throughout the world. Common concern for common problems motivates people of different religious traditions to join forces.

Worldwide, the last half of the 20th century saw the rise of many new forms of cooperation among people of different religious traditions. While violence and war have fractured nations and regions along religious lines, they have also created new interfaith alliances for peace. The environmental crisis has made clear that the nations and religious communities of the world are interdependent in an ecosystem that does not regard human boundaries. New waves of migration and immigration have made people of all religious traditions next-door neighbors, affected by the same civic decisions. Today, going it alone has become impossible in communities in which neighbors worship in varied postures, base their judgments on differing authorities, recognize sometimes divergent revelations, and speak of the divine in a multitude of ways. Various forms of interfaith cooperation are attempting to build the relationships of understanding that will sustain this shrinking, interdependent world with its many multireligious societies.

For twenty-five years the Peace Abbey in Sherborn, Massachusetts sought to promote peace education and social action for the common good. The Peace Abbey grew out of the efforts of the Life Experience School, a group of disabled and terminally ill young people who commit themselves to serving the world as peacemakers. In 2011, the Peace Abbey was incorporated into the Center and Archives for Peace, Social Action, Public Policy, and the Arts at the University of Massachusetts, Boston. Meanwhile, atop a hill in Leverett, Massachusetts sits a Buddhist stupa, or pagoda, an ancient structure “conceived as a prayer for peace, a tangible structure that manifests the dedication of our lives to justice and peace.” The Peace Pagoda’s well-known Peace Walks are interfaith actions undertaken to tackle issues of the day, such as protesting nuclear proliferation or supporting local environmental initiatives.

Recently, interfaith movements have often focused on caring for and ministering to immigrants, particularly those who face material hardship and social marginalization. The Interfaith Immigration Coalition is a partnership of dozens of faith-based organizations committed to immigration reform and the humane treatment of migrants. Clergy, in acts like Rev. William Barber’s “Moral Monday” protest in July 2019, have marched near America’s southern border and attempted to minister to detained migrants. These marches are often national efforts, bringing together faith-based activists from around the country, often with significant media coverage.

Around the nation, there are many local expressions of common cause for social action. In the Interfaith Conference of Metropolitan Washington, opposition to urban violence and the promotion of gun control have brought Christians, Jews, Muslims, Sikhs, and Hindus together. The ICMW also annually publishes a guide to emergency food, shelter, and health care services in the Metro area. In 2012, this coalition of faiths made a public response to anti-Muslim advertising in buses and subways around D.C. Many other local interfaith efforts to promote social action for the common good are profiled in the pilot study, America’s Interfaith Infrastructure: An Emerging Landscape.

Beyond city and regional efforts, national and international organizations have made a significant impact in the movement that understands interfaith engagement as both a social justice issue unto itself and an opportunity for amplifying the efforts of individual communities through collaboration. These include:

The International Association for Religious Freedom, an organization now based out of the United Kingdom with chapters in over sixteen countries, grew out of the first World’s Parliament of Religions in 1893. Building on the momentum of the Parliament, which had been a historic moment in the life of the interfaith movement, a group called the International Council of Unitarian and Other Liberal Religious Thinkers and Workers convened in Boston in 1900. In subsequent years it came to include a few Muslims, Jews, Catholics, and reformist Hindus; its international congresses addressed tackled topics such as justice for women and the expansion of nationalism to include a wider view of human loyalty. Eventually, these efforts coalesced into the IARF.

The National Conference for Community and Justice, originally an interfaith alliance between Christians and Jews, has now expanded to include people of other faiths at both local and national levels. NCCJ especially addresses ethnic, religious, and racial prejudice through programs like “Bridges,” a two-day anti-bullying and prejudice reduction conference for middle school and high school students.

The Interfaith Alliance is a Washington lobby to bring different communities of faith together on issues such as immigration reform, marriage equality, and the protection of religious freedom.

The North American Interfaith Network brings interfaith organizations and religious groups together online and in person with its annual Connect conference, hosted each year by a different member organization. For twenty five years, NAIN has sought to promote understanding across traditions and promote the work of member organizations.

Interfaith Youth Core bring together youth and young adults on college campuses across the nation to promote a climate of religious pluralism built through dialogue and service. Eboo Patel, one of the founders and President of the Interfaith Youth Core served as an advisor to President Barack Obama’s Interfaith and Community Service Campus Challenge which in its second year drew in over 250 institutions of higher education across the nation.

Interfaith organizations and networks across the United States continue to be dynamic, rising to meet the challenges presented to local communities and adapting to address issues of national and international concern as they arise. These efforts have come to include Atheist and Humanist communities as well. For instance, as a part of the 2012 celebration of World Interfaith Harmony Week, the Harvard Humanist Community organized “Cards and Scarves,” an interfaith service opportunity in Greater Boston. Chris Stedman, in his 2012 book Faitheist: How an Atheist Found Common Ground with the Religious, makes the case for why the non-religious ought to engage with the religious. As one of four primary reasons, he cites the opportunity to act on a shared goal of ending “religious extremism and other forms of oppression and suffering.”

While structure and scope vary from context to context, interfaith efforts to create a better world through social action play a vital and increasing role in public life.

What does it mean to “mobilize” a movement for social justice in the Internet Age? The word “mobilization” has strong associations for the Boomer Generation, when organizing hundreds to march, rally or take part in a sit-in was the visible manifestation of social justice activism.

But to the Millennial Generation (often thought of as those born since 1981), which grew up immersed in new technologies, it might mean something quite different — even if the impact is every bit as significant.

“The World Conference on Religion and Peace (WCRP) is an international organization of representatives of the world’s major religious traditions who meet to study and act upon global problems affecting peace, justice, and human survival. Five world conferences have been held (Kyoto, 1970; Louvain, 1974; Princeton, 1979; Nairobi, 1984; and Melbourne, 1989) as well as numerous regional assemblies. From 1970-1984, the international headquarters in New York was directed by Homer A. Jack, Secretary-General. The headquarters was moved to Geneva, Switzerland in 1984, with John B. Taylor as Secretary-General. The collection includes meeting minutes (1970-1987); correspondence (1968-1984); WCRP publications, reports, press releases, financial records, Homer Jack’s notes and memoranda on meetings, photographs and sound tape recordings. Materials relating to the major world conferences include minutes of preparatory committees, correspondence with participants, background material, and conference documents, resolutions, and reports. Major subject areas are disarmament and human rights.”

Historical Background
The World Conference on Religion and Peace (WCRP), was “a world-wide movement, consisting of men and women of faith who meet to share their concerns about the many factors and situations which threaten world peace and deny human dignity. While acknowledging that religious elements have aggravated rather than reconciled existing tensions and conflicts, yet we would work together as religious people and with all people of good-will for the realization of a world free of violence — a world in which all people may live in freedom, justice, and peace.” [quoted from the brochure announcing the Fourth World Assembly in August 1984]

The first World Conference on Religion and Peace (1st world assembly) was held in Kyoto, Japan, in October 1970, but the idea for holding such a conference is attributed to the dreams of four religious leaders in the United States who began meeting in the fall of 1962. Rabbi Maurice Eisendrath, Dr. Dana McLean Greeley, Bishop John Wesley Lord, and Bishop John Wright, together with several others, arranged two conferences in the U.S. (the first in January 1964 in New York and a second, much larger, National Inter-Religious Conference on Peace in Washington in March 1966) before deciding to explore the possibilities for a world-wide conference of religious leaders. In 1967, Homer A. Jack and Herschel Halbert traveled to Asia to seek out sympathetic partners with whom they could work to plan for a world conference. In January 1968, a group of 20 Americans undertook a round-the-world peace mission, with stops in Geneva, Rome, Istanbul, and Jerusalem to consult with top representatives of four major world religions. The trip included a week-long International Inter-Religious Symposium on Peace in New Delhi (sponsored by the U.S. Inter-Religious Committee on Peace and the Gandhi Peace Foundation) and a Japanese-American Inter-Religious Consultation on Peace held on January 22, 1968, in Kyoto. Based on the success of these meetings, an Interim Advisory Committee (composed of religious leaders primarily from India, Japan, and the U.S.) was formed which gathered in Istanbul in February 1969 to explore convening a world conference. This led to the formation of a Preparatory Committee for a World Conference on Religion and Peace which met in July and December 1969. Archbishop Angelo I. Fernandes agreed to serve as President of the World Conference on Religion and Peace, with Rev. Nikkyo Niwano and Dr. Dana McLean Greeley as co-chairmen. Homer A. Jack, then working for the Unitarian Universalist Association in Boston, became Secretary-Genera, working first in Boston and later in Japan.

The response of the United Methodist Women and a coalition of Jewish, Muslim, and Christian organizations to anti-Muslim ads in San Francisco, New York, and Washington, D.C. subway systems. The anti-Muslim ads were posted by Pamela Geller whose organization, Stop the Islamization of America, has been label a hate group by the Southern Poverty Law Center.

United Methodist Women believes freedom of speech must include freedom from hate speech in the nation’s capitol. On Monday October 15, standing shoulder to shoulder with members from Jewish, Muslim and other Protestant faith communities, representatives of United Methodist Women made the next stop on a transit line protest to respond to anti-Islamic ads now appearing in metro stations in Washington, D.C.

Green and white signs denouncing hate speech began showing up in subway stations in New York City earlier this month and on Monday morning were being displayed in stations across the Washington, D.C., metro area. The signage counters an inflammatory and Islamophobic ad campaign put out by American Jewish blogger Pamela Geller and her organization. Her campaign attacks the Islamic community, stating that “in any war between the civilized man and the savage, support the civilized man. Support Israel and defeat Jihad.” Geller and her organization have been labeled a hate group by the Anti-Defamation League and the Southern Poverty Law Center.